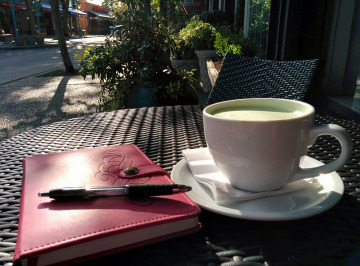 Cities do not speak. Beaches do not dance. Mountain ranges do not dream. Places are not, intrinsically, human. The humanity we derive from them is based in our own perception, the sights, sounds and smells that form a location or environment in our mind. There is no natural anthropomorphism to a place, and that is why it is so important that we put it there.

As authors, we are often all-consumed with the characterization and plot of our work. The fiction genre I write in most often is heavily geared toward characterization, and I often find myself neglecting other story elements in favor of it. Setting is important, of course, but it is often considered less so than the hero, heroine, villain, etc. Setting is backdrop, setting is dressing.

Because cities do speak – the rumble of taxis on pot-holed roads is an accent altogether different than trolley cars clanging on ancient tracks, than horse hoofbeats against cobblestones. Beaches do dance, undulating with the tide and the pull and ebb of ships docking against seaweed-covered piers. Mountain ranges dream in the expanse of clear, crisp sky, in the singular detail of an eagle cutting a dark path through the bright blue, in the sense of freedom and eternity that open air breathes into us.

It’s true, that our perspective as authors is what colors a place, giving it the humanity we so often associate with cities and towns. But that’s not a bad thing. In fact, when it comes to writing, it’s fundamental. Setting cannot take a back seat to your story, be it fiction or journalism. Setting gives us grounding, a place, as readers, we can always return to.

And that is why it is so important to consider our locations – however many or few the book, story or article might contain – their own version of characterization. Learning about your protagonist from the way they interact with their surroundings is not so different from watching them engage in conversation with a friend or family member. Do they return to their home ranch and see the blue of the sky or the barrenness of the plains? Does the beach smell of fried dough and confectioner’s sugar, or the stench of seaweed and rotting wood? Which scent does your protagonist enjoy more?

When we turn our locations into characters all their own, we must explain why our book or story takes place where it does, just as we must give our characters inarguable reasons for being and our plot points purpose.

It is a question more difficult than it might seem.

A love story set in Paris is easy, but when the author delves deeper into the location, they might find that Paris is the wrong kind of romance for their characters, the saccharine sweet city too far removed from the boardwalks of New Jersey. A going home again tale that takes place in Colorado is altogether different from one in Texas, from one in New York. Setting, just like character, is multi-faceted, three-dimensional, and wildly open to interpretation. A better understanding of exactly where the story fits in space, adds credibility, humanity, and reality to the book.

As a journalist, one of my favorite techniques for writing fiction is interviewing my characters. Sometimes, the questions are directed at myself as the author – do you know what your character looks like? Other times, I will sit my protagonist down and ask them about their dreams, about the biggest challenges they have faced, about what frightens them most. The expressions they make, the ticks of their hands, the length or brevity of their responses, is all part of the character development process. It is thorough and time-consuming. It is effective.

We must be that committed to learning about our environments as well. Whether the story is a fictional tale that takes place three thousand years in the future or a nonfiction essay about returning to South Africa to see your mother one last time, setting places a fundamental role. We, as people, exist in space, just like the characters we give voice. No story takes place in a vacuum – and if it does, write about the complete absence of color, sounds, and smells.

So, the next time you take to the keyboard, consider your setting as a character all their own – just an important and fundamental to your story as the protagonist and the antagonist. If the setting isn’t as important, then maybe that’s not really where the book belongs. If it is that important though, if you’ve put yourself on a chair in a Venetian square, watching the world around you, inhaling moist brick and gelato flavored air, then you just figured out how to make cities speak, beaches dance and mountain ranges dream.