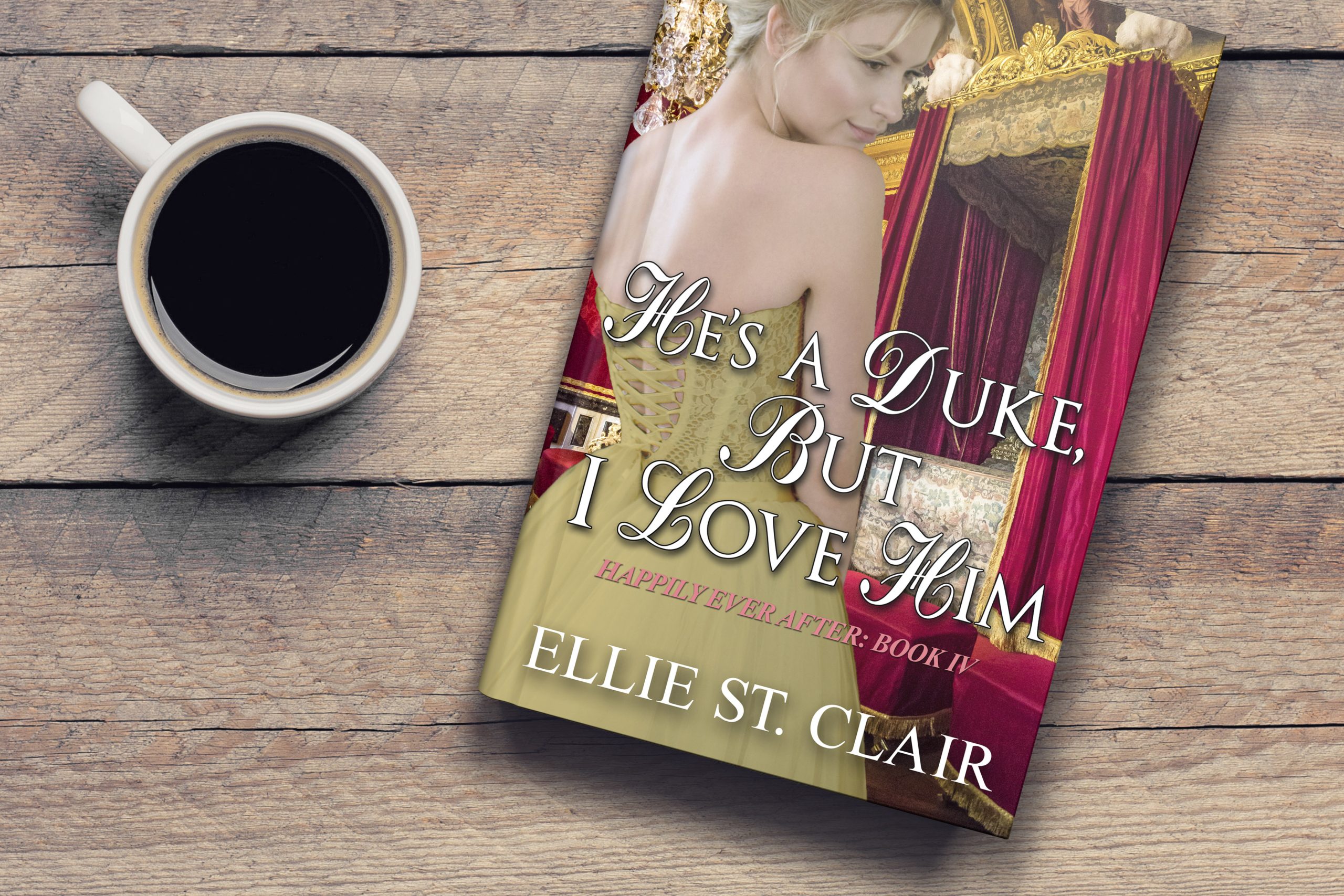 I got to sit down with Ellie St. Clair to talk writing, gambling, and her new release, He’s a Duke, But I Love Him!

I have always loved reading, but I knew I wanted to write in high school, around the tenth grade. I remember coming to the realization at the time we had to begin trying to determine what we wanted to do as a career. All I knew was that I wanted to write. Unsure of what path to take, I signed up for English as well as journalism classes.

A reader posted the following message on my Facebook page regarding one of my books that was just incredible to me: “It left me feeling great happiness which I took and allowed it to flow into my own life…we can all do with a bit of euphoria in our lives…”

One of the challenges was simply finding time to write as I was starting out. I was working a full-time job plus had a young son at home and yet I wanted so badly to pursue this dream! It was just a matter of keeping focused on the end goal and finding every extra moment to put into my work.

At first, I wrote a bit more by the seat of my pants so to speak, but I have continued to grow and refine my process, and outlining has helped tremendously. That being said, I find my characters often like to stray somewhat from their initial course, but having a path certainly helps. I research the major plot points and pieces of history as I write my outline. As I write the first draft, I let it flow, and on the second draft I do additional research for historical accuracy and make changes where necessary.

Hmmm, good question! While the majority of my books are set in Regency England, the one exception is Quest of Honor, which, while set in the Regency period, spans across the ocean. I loved researching the pirate life, particularly learning about the number of female pirates there were! In addition, there was a gentleman’s pirate who was rather interesting — I based one of my characters on him. The weirdest research … nothing comes to mind, but I should start making notes of the interesting nuggets I dig up!

I wrote my first book long before I ever dreamed of publishing it. I was so concerned about whether it was good enough or if people would actually like it. I should have gone ahead and published much sooner!

I have a few places I love to write! My absolute favorite is on the back deck in the summertime. Through the winter I love sitting in my big comfortable yellow chair by the front window, especially in the morning when the sun is shining in. I try not to drink too much coffee, but that’s definitely my favorite. I limited myself to one in the morning and afternoon. My favorite snack is definitely anything sweet. 🙂

I would actually have to say Alexander from Someday Her Duke Will Come, probably because he is most like my husband out of my characters so far. I’m a rather serious person, slightly introverted, so I seem to be drawn to my opposite, someone who is light and fun and doesn’t take life too seriously.

Next up is the fourth book in the Searching Hearts series, which will feature Polly Harrington!

Continuing to write, of course, and also taking the opportunity to connect with my readers! I have just created a Facebook group so that readers can discuss the books and the characters, and I’m looking forward to it, as well as to focusing on interactions with readers through social media and my newsletter.

For many years she has written short stories, non-fiction, and has worked on her true love and passion — romance novels.

In every era, there is the chance for romance, and Ellie enjoys exploring many different time periods, cultures, and geographic locations. No matter when or where, love can always prevail.

She has a particular soft spot for the bad boys of history and loves a strong heroine in her stories.

She enjoys walks under the stars with her own prince charming, spending time at the lake with her children, and her constant companion, her Husky/Border Collie. 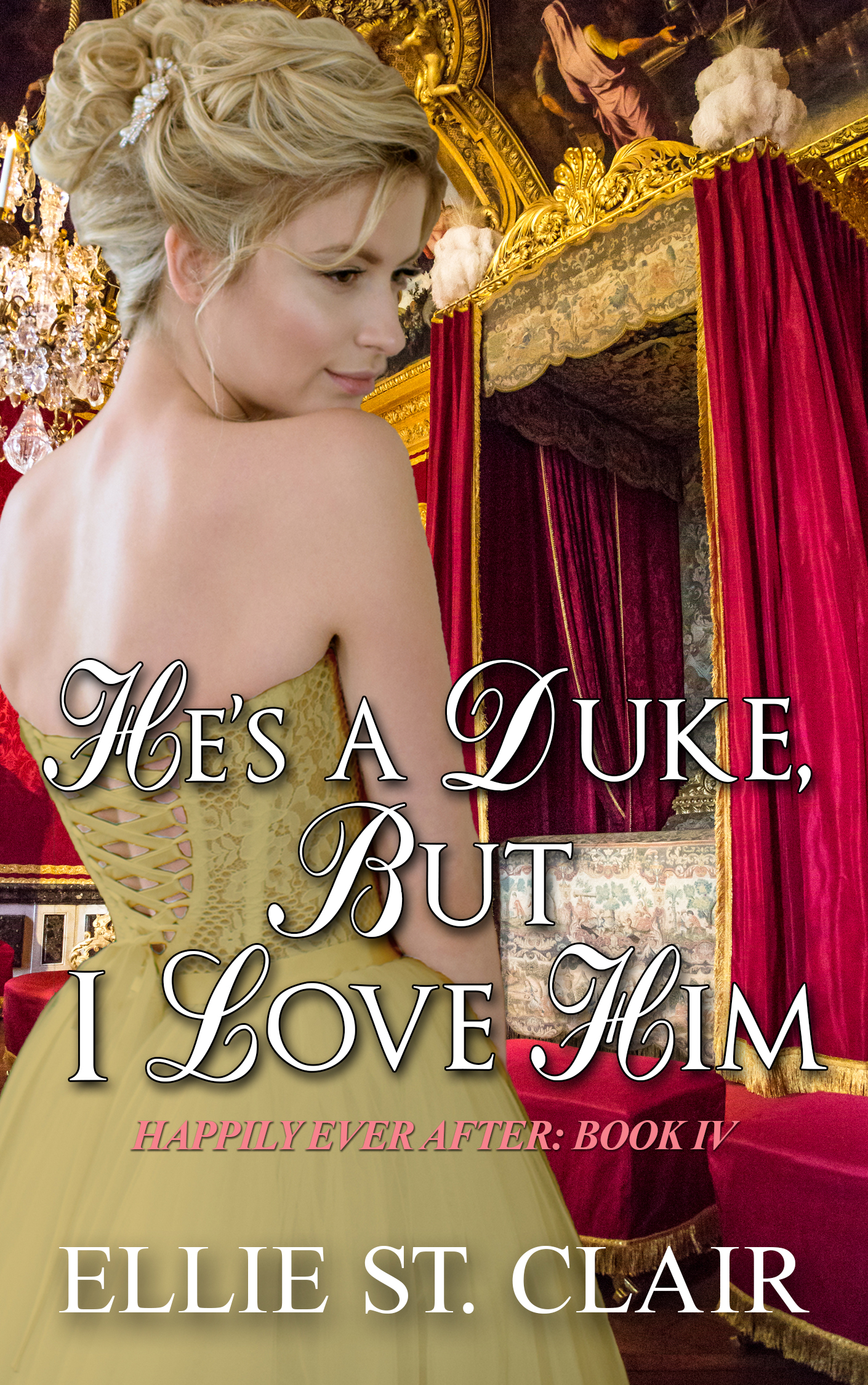 Tell us a little about your new release: He’s a Duke, But I Love Him!

Olivia and Alastair were secondary characters in Once Upon a Duke’s Dream, and I just fell in love with both of them. Olivia was actually a late addition to the book. She wasn’t initially in the outline, but I felt Isabella needed someone beside her along her journey. Olivia took on a life of her own, and sparks flew between her and Alastair and their witty banter and tension wrote itself. I knew they needed to have their own story.

Yes, I did outline the story, though I went back and added a couple of scenes after the first draft.

Both Olivia and Alastair have such strong personalities that it didn’t take much for them to jump off the page. When we are initially introduced to them, it is in situations that really speak to who they are and also where they may find themselves as the story continues. I also like to find inspiration for my characters in terms of a physical sense, and do a lot of searching on Pinterest to create visuals for my ideas.

My favorite part was writing all of the scenes when Olivia and Alastair were together as they had such witty banter. Alastair always sees right through her when she tries to keep things from him or do something she knows would be frowned upon, and yet that doesn’t stop her. The fact he doesn’t restrict her makes it even better. The most challenging aspect was ensuring that Olivia’s schemes weren’t too farfetched — that, while she certainly behaved outside of society’s expectations for her, her actions were still believable.

Yes, it is part of a series! It’s the fourth book in my Happily Ever After series. The next book in the series will likely be a few months away. I am working on a book in my other series, Searching Hearts, first, and then I will get to work outlining. I have a pretty good idea of the characters and the story. They may or may not be have been introduced in He’s a Duke, But I Love Him. 😉

While Olivia and Alastair have met before, this is the first time they are reacquainted after a year without seeing one another. I had this scene practically written in my head before even outlining the book. I could see it so vividly and the words flew onto the page. This scene was the premise for all that followed.

Olivia sensed a new presence at the table.

“I’d better have more luck tonight,” the man said, his voice a rich baritone, though tinged with slightly masked resentment. The silky voice had Olivia freeze in her chair. She knew that voice. She knew it all too well.

It had flirted with her for a week-long house party, and remained in her thoughts, despite her efforts to push it away. She swallowed as she looked about her, her thoughts racing frantically as she kept from raising her face to the man, allowing him only the view of her dark wig and the turban she despised.

“Well, either way, you are in for a treat, Kenley,” said the baron, “as the lovely Mrs. Harris has joined us this evening!”

“It’s not Kenley anymore,” he said, seemingly not affected at all by the woman sitting at the table. “It’s Breckenridge. The Duke of Breckenridge.”

Olivia couldn’t help herself at that, her eyes snapping up as they rose to his face. She had nearly forgotten his father had passed. Her friend Isabella had mentioned it in passing some time ago, and she supposed the Duke had been in mourning since.

Her crystal blue eyes met his of soft green, which flared in recognition as he took her in. He said nothing, but let his gaze wander from the tip of the turban-topped dark wig, down her body to the slippers on her toes, letting his eyes rest for a moment on the bosom that spilled out of her tight red dress.

She realized she had been lying to herself over these past months. She couldn’t deny the effect he had on her, from his golden blond curls, well-chiseled cheekbones and the depths of his eyes, to the deep dimple she remembered imprinting his face when he smiled his mischievous grin.

Find it on Amazon!