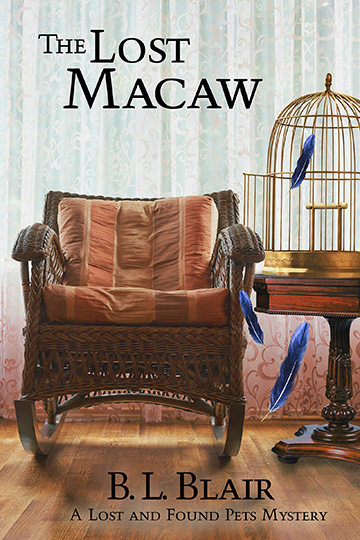 I got to sit down with B.L. Blair to talk writing, bird cages and her new release, The Lost Macaw!

I have always been interested in writing. I first starting writing stories when I was in college, but in 2012, I learned about KDP and self-publishing. I dusted off some old books I had written, freshened them up a little, and jumped into the fray in 2013. I guess that is the moment when I decided I wanted to be a writer.

Meeting people. Most of it has been online, but I have developed several friendships with other authors and many readers. It has been so much fun.

Finding time to write. As a self-published author, I sometimes get bogged down in everything else – all the marketing, the social media, the scheduling of promotions, and the list goes on. It’s hard to remember to put that aside and just write. I try to set goals and deadlines for myself. I also rely on my friends and family to help keep me focused.

That’s easy – Marcus Cantono. He is the gorgeous bad-boy in my Leah Norwood Mysteries. He isn’t Leah’s love interest, but he’s yummy. I hope to write a short story or two with him as the love interest.

The next Leah Norwood mystery. It’s called Dead in a Pickup. I hope to release it sometime next year.

B. L. Blair writes mystery/romance stories. Like most authors, she has been writing most of her life and has dozens of books started. She just needs the time to finish them.

She is the author of the Holton Romance Series, the Leah Norwood Mysteries, and the Lost and Found Pets Mystery Series. She enjoys reading books, writing books, and traveling wherever and as often as time and money allows. She is currently working on her latest book set in Texas, where she lives with her family.

Tell us a little about your new release: The Lost Macaw

This is the fourth novella in the Lost and Found Pets series. In The Lost Macaw, a parrot is taken from an elderly woman and held for ransom. Each of these novellas are stand-alone books, but there are also a couple of continuing storylines running through them.

In the first novella, there is a character by the name of Mrs. Kearns. She is a minor character, but I really liked her so I wanted to bring her back. She isn’t in The Lost Macaw much either, but it’s her bird that gets kidnapped.

I dove right in. I always have a basic idea for the story – a beginning. About a third of the way through, I put together a rough outline to finish the book.

I didn’t have to do a lot of research for this story, but there were two items I had to learn more about. One was bird cages. It is amazing the number of different options that are available. The price of some of them was an eye-opener as well. The other item I had to research was vintage cars. I don’t know a lot about cars, but a 1968 Chevrolet Camaro plays an important role in this story.

The Lost Macaw is part of The Lost and Found Pets series. It will be released on December 14, 2017. I have two more novellas planned for this series, and hopefully, a few more.

“Your little old lady is quite interesting, Alex,” Halie said.

“She didn’t exist until about thirty years ago.”

“I did a preliminary background search on her. In general, she is clean. No debt. The house is paid off as is her car. The one thing that jumped out at me was the fact that she had a safe deposit box at four different banks.”

Luke raised one eyebrow. I got a sinking feeling. I had noted the bank accounts but hadn’t really given them much thought.

“So why does an eighty-year-old woman need four safe deposit boxes?”

“Why does she need more than one?” Luke muttered.

“Exactly,” Halie said. “So I dug a little deeper.”

“What did you find?”

“About thirty years ago, Joseph and Trudy Kearns purchased the house on Carriage Street. Back then, it was a new neighborhood, and the prices were cheap. They paid cash. They also opened a bank account, and Joe got a job working for the city. Those are the first records I can find for either one of them.”

“Trudy would have been fifty at that time. Her husband probably a few years older. What about birth certificates? Social security cards?”

“They had them, but conveniently, they were issued from a small county in Virginia where a massive flood destroyed all their records. The county office was in the process of moving the old paper records to electronic when the flood hit.”

“Let me guess. The Kearns’s records did not survive the flood.”

“So the only records for them are the ones they had in their possession.” I paused a moment. “Do they look real?”

“So they could be authentic.”

“Or really good forgeries. In some ways, it was easier back then.”

“Anything else?” I asked.

“Not really. Like I said, she’s pretty clean. Lives on a fixed income of social security and a small pension from her husband’s job. It isn’t much because he only worked for the city for twelve years before he had to retire.”

“I’ll keep digging. See if anything else turns up.”

After ending the call, I looked at Luke. He had a perplexed look on his face that I had a feeling mirrored mine.

“Who the hell is Trudy Kearns?”