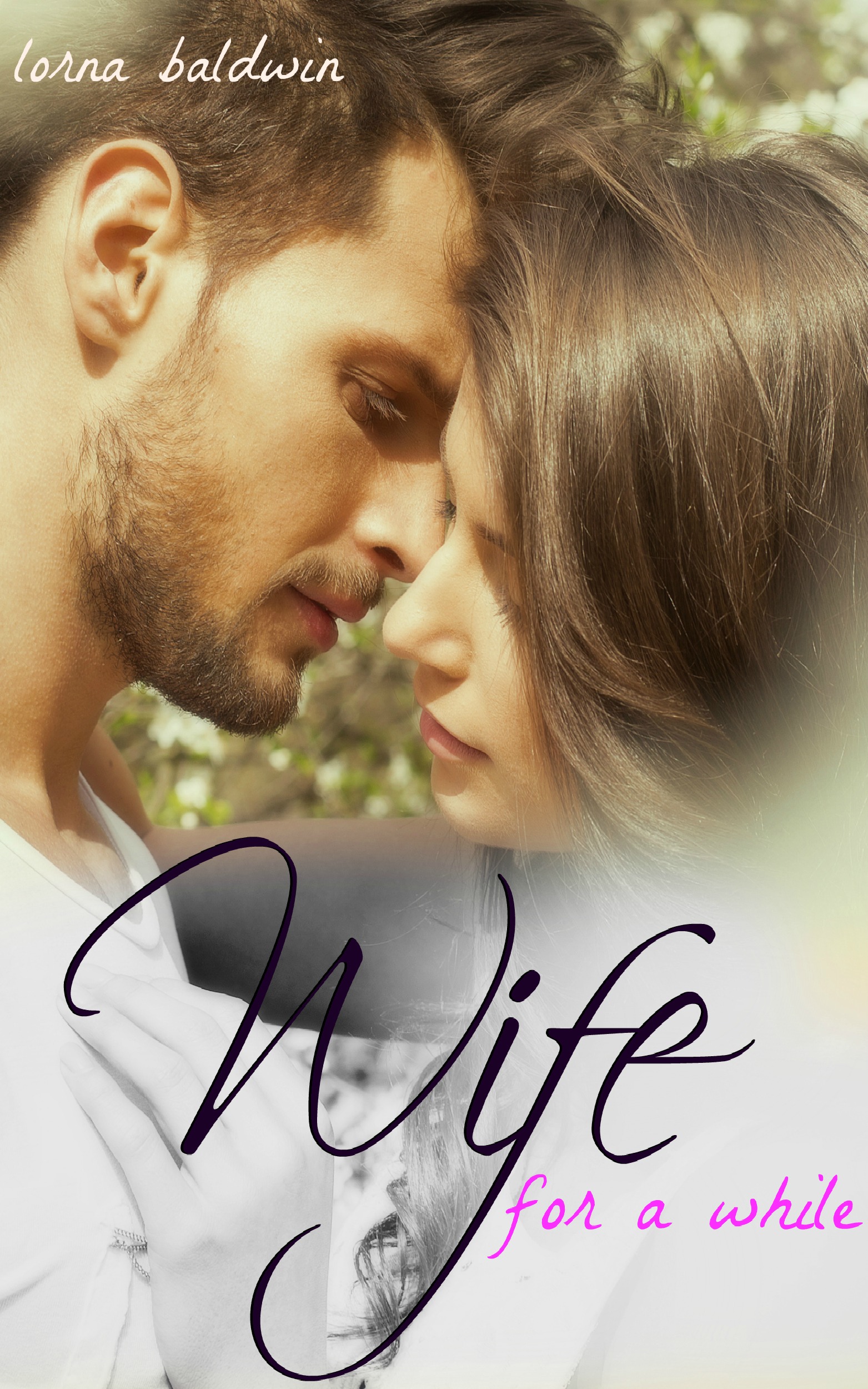 I sat down with Lorna Baldwin to talk writing, passion and her book, Wife for a While!

I think I was in third grade. We had a unit in poetry. I remember standing at my teacher’s desk, watching her read through my poem, and seeing her smile.  She looked at me and asked where I came up with this stuff. It was the first time I felt like I’d done something really, really right. That little bit of praise put me on the path to being a writer, and I can’t be thankful enough for that smile, that question, and that teacher.

Meeting other authors and readers! There’s such an amazing community of romance writers and readers. People are surprisingly supportive; you’d expect some competition, but most people just want to help. Maybe it’s all those happy endings we love so much; the romance community just seems to want everyone to find their own happily ever after!

Isaac Asimov said that “writing is a lonely job.” Countless other writers have confirmed this. If you’re not the most outgoing person (which I am not), and you don’t have coworkers to befriend, it’s easy to realize you’ve gone days without having a real human interaction. At least, I certainly found that. My partner is great company, but you can’t depend on one person to fulfill all your social needs. And adulthood has led all my friends to scatter across the country. There was a time, when I lived alone, that I realized I hadn’t talked to anyone in person – except the grocery store clerk – for two weeks! That’s just not healthy, in my opinion.

You’ve got to be proactive about giving yourself the life you deserve, and for me that meant meeting people. I started volunteering, going to meetups, and I moved in with my partner and some housemates. Being a writer is a unique lifestyle with challenges I never expected, but it’s well worth the struggle to overcome those obstacles as long as I can keep putting words on the page.

I do outline my books, but the finished product rarely looks very much like the outline. Your characters end up wanting to do things you didn’t expect them to do, and the story itself follows its own path. Sometimes the second half of the book ends up totally changing the first half. Sometimes the dog becomes a cat, and the plane becomes a bullet train, and the blonde-haired bartender morphs into a red-haired psychic. An outline helps me get started, but it rarely helps me finish!

Researching is one of my favorite parts of the job! My search history is full of questions like: “how do parrots mimic sounds”, “how do bone marrow transplants work”, “can criminals really escape to Costa Rica” and “world’s most expensive flowers”. A lot of my stories involve long road trips, so I’m always studying maps and figuring out distances – which I adore! The weirdest thing I’ve ever researched? Let’s just say I know more about worm farms than I ever expected to know.

Read more! No matter how much you’re reading now, you can always be reading more. Read in your genre, and other genres. Read what’s hot right now, what was hot two years ago, and what’s never, ever been hot. Read the classics, even (and especially) Shakespeare. When it’s time to sit down and write, try to forget everything you read and just start writing. You’ll have absorbed all sorts of innate knowledge, and it will come out naturally as you write.

I’m working on a sort-of-sequel to Wife for a While. There were some characters I kind of fell in love with while I was writing that story, and now I’d really like them to fall in love with each other.

I’m a twenty-something transplant living in Nashville, Tennessee. I love funny heroines, bawdy heroes, ballsy moves and happily ever afters. When I’m not writing, you can find me hiking across entire states, fantasizing about Cillian Murphy, watching terrible Lifetime movies, and making curry.

Wife for a While is a story about a rich man, a hard-working woman, a mutually beneficial arrangement, and a very strange florist. Benton Spencer needs to protect his inheritance by finding a wife, and Jolene is the wedding planner who catches his eye.

If the story sounds familiar, that’s because it is! I love marriage of convenience books, and wanted to try my hand at one. But I didn’t want to write one of those love stories where the characters act like children, have temper tantrums, miscommunicate with each other, and let silly things get in the way of their budding relationship. I wanted to write about people acting realistically in the midst of a highly unrealistic situation. I wanted to write about a woman I could admire, and a man who could impress me. I think I pulled it off, with a good dose of humor and heat thrown in to make it fun.

I’ve read a lot of great marriage of convenience books, and drew tons of inspiration from them. Some of my favorites include Devil in Winter by Lisa Kleypas, Kiss an Angel by Susan Elizabeth Phillips, and The Wall of Winnipeg and Me by Mariana Zapata.

I tried to write characters I would want to be friends with. To do that, I made them kind of like my friends! What would my best friend say about this situation? What would my favorite karaoke buddy think about what the hero just said? Would my roommate let a guy get away with something like that? It was a little harder with Benton, because I don’t know any arrogant rich men, but I tried to give him some of the charm I find in my male friends and my partner.

My favorite part of this story was writing the friendship between Jolene and Dorothea. I’m a sucker for a good friendship; a good girl-on-girl friendship can even redeem a not-so-good romance for me. As much as I loved making Jolene and Benton fall for each other, it was so much fun to imagine these two lifelong friends talking about him over dinner!

Benton was the biggest challenge for me. Everything about him. In my first drafts, he was much worse than he turned out in the final product. I just couldn’t stand him, and I had no idea how he was ever going to become the man Jolene deserved! Finally, I had to listen to my gut and start over with him. I realized that I was writing him unfairly, not even giving him a chance to redeem himself. I really like how he ended up, and I hope my readers do, too.

While Jolene and Benton’s story is mostly over, the new story I’m writing will definitely have some room for them to make an appearance! Imani, one of Benton’s employees and Jolene’s close friend, and Lars, Benton’s brother, already started sparking in Wife for a While, and I’ve been so excited while writing their story. Lars is so different than his brother, and Imani is adorable. Benton and Jolene will be rooting for them, and I hope my readers will feel the same!

I was surprised that she didn’t ask for anything else. It was me who added in the severance pay – she wouldn’t take more than half a million, though.

“I don’t need that much money to save my business,” she asserted. “I’ve been working since I was 14. You’re already paying a lot of money for Dante, this just feels like charity.”

I should have known that Jolene would bristle at the merest suggestion of charity. She had that way about her. The do-it-all-by-myself attitude that I both admired and found frustrating. It was, in its own way, pretentious. Not as pretentious as all the art I owned that I neither understood nor cared about, but still.

I suppose she had a point about this not really being a job. Besides being at my side at key social events, we’d be required to spend an allotted amount of time out by ourselves – “date nights”, as any married couple would have. Towards the end, those “date nights” would grow more distant, and there would be some acting required. It would be good to get people talking about a divorce before you announced it. Very authentic.

When the divorce came, Jolene would walk away with any gifts or possessions acquired during our “marriage”, as well as her severance pay. There would be an account set up for young Dante, with Jolene and I as co-executors.

She would return the ring.

The ring that currently sat between us. We were both on the last pages of our contracts. A notary public waited for us to sign.

“Are we really doing this?” Jolene asked, turning her brown eyes up to mine. Looking stoic and cool and beautiful.

“I am if you are,” I said. She offered me a half-smile before bending her head and scratching her signature across the dotted line. I did the same, and we handed the contracts over to be notarized. I took the black velvet box in my hand and opened it, revealing the centuries-old diamond-encrusted white-gold monstrosity that would live on her finger for the next two years. She tried to hide her reaction, but I saw it. The widening eyes as the ring glittered obscenely, bright enough to blind someone standing at the wrong angle. The realization of just how rich she was about to become – if only by fraud. She glanced up at me.

My breath caught in my throat. I hadn’t really thought of that. But now that she said it…

Holy shit. I really, really did. I wanted to take her hand and slide that ring up her finger, feel it fit all snug and warm around her flesh. Something strange and concerning was happening in my chest. I nodded.

Jolene slipped her hand across the table, offering me that ring finger. I plucked the ring and brought it to her nail, then pushed it down, over her knuckle, to the base of her finger. It looked…beautiful.

Our eyes met again, and for a second we were both quiet.

“Here we go,” she muttered, almost too soft to hear.

And so it was. There we went.