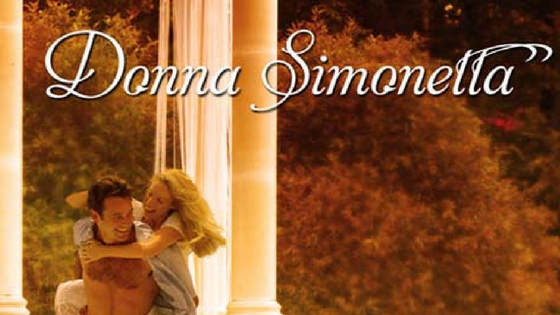 I sat down with Donna Simonetta to hear about her new book,  A Sweeter Spot!

I love so much about it that this is a tough question to answer. Probably the most exciting moment was when I queried the Wild Rose Press with Angels Fly (my first published novel), and I had an email reply from an editor asking for the full manuscript. The road to getting published is paved with rejection letters, so when I saw the Wild Rose Press in my inbox, I braced myself to read ‘thanks, but no thanks’.

The excitement I felt when a publisher said they wanted to read more of my work was indescribable, and I was on vacation to attend my husband’s family reunion at the time. We were staying at his cousin’s house, and I’d checked my email right before bed, so I couldn’t shriek and run around the house the way I wanted to, since everyone else was asleep!

I always begin by thinking about the main characters. I start a notebook about them, and include details about their physical appearance, background, interests, friends, family…really flesh them out as much as I can. I find it helps me tremendously as I write. It makes it easier for me to know what they would do in any given situation. I have a love/hate relationship with outlining.  I like to have direction, but given my character-driven stories, I like to have leeway to diverge from it.  When I started writing, I read a post by Jim Butcher, (author of the Dresden Files, one of my fave series!) and he said he draws an actual story arc and painstakingly plots out each point on the arc. I liked the arc idea, so I draw an arc, with the beginning of the story on one end, the peak at the center, and the end at the bottom of the arc, so I know what I’m working towards, but still gives me room to let things happen along the way.

I would suggest they be resilient and keep moving forward. There was a lot more rejection than I was expecting, but I learned that I couldn’t take it personally. Try to learn from each one, maybe have a brief cry or glass of wine, and then get over it. Send out another query. Write another book. Keep your chin up, and keep working.

I’m happily married, so this is a purely theoretical answer…I want to be clear about that. Tee hee. It would have to be Jeff Braden from A Sweeter Spot, the first book in my Rivers Bend trilogy. I know that sounds phony, since A Sweeter Spot was just released, but it’s true! Jeff is close to my heart, as a lot of his character traits are based on my real-life husband.

In addition to the Rivers Bend trilogy, I am working on a ghost story, which I’m really excited about writing, and can’t wait to get back to. It’s a little different for me. I want it to be scary–kind of a modern-day gothic romance, but it also still has my characteristic humor.

After years working in the business world, my love of reading led me to get my MLS, and I currently work part-time in a school library, a job that allows me lots of time to explore my other love – writing romance! I live in Maryland, with my husband, who is my real-life romance hero. We both enjoy traveling to visit our far-flung family and friends, and spending time on the beach with an umbrella drink and a good book.

Tell us a little about your new release:  A Sweeter Spot!

A Sweeter Spot is the first book in my Rivers Bend trilogy, set in a fictional small town on the Maryland-Virginia border. It’s a contemporary romance, about a Hungarian-American woman from Connecticut, who moves down to Virginia to get away from her wealthy, controlling grandmother. She goes to help her best friend, who is in the middle of a difficult pregnancy, but ends up finding love and home with Jeff Braden, a widowed former NFL player, who has moved back to his hometown to raise his daughter.

I like the idea that home is where you make it…with the people you love and who love you, and this book explores that idea. The title comes from a quote about home that I found, which says that home is “a sweeter spot”.

A Sweeter Spot was released on February 10, 2017, so it’s available now! I’m currently waiting to hear back from my editor at the Wild Rose Press on book 2 in the series, which is the story of Heather and Mick, Jeff’s sister and his old friend from his football playing days. And I’m about halfway through the first draft of the third book in the series, which is the youngest Braden’s story. A newcomer to Rivers Bend might just be the one who can tame Jason, the wildest Braden!

She picked a dandelion, whose flower had turned into a puffball, and blew on it, scattering the fluff to the wind. “Maybe. Maybe not. But thanks for the support.”

She pushed to her feet and took a couple of steps toward the river. Jeff rose and followed.

How could he be so angry at a man he didn’t even know? How could this Pierce jerk have slept around on a woman like Maggie? And the prick had even made her doubt herself in the process. It was written all over her anguished face.

He stood behind her and gently kneaded her shoulders. He turned her to face him and cupped her face in his big hands.

“This Pierce guy is the biggest fool on earth to go to someone else when he had you at home, Maggie.”

She blinked away tears, and he felt his heart constrict. Before he could think it through and decide it was a really bad idea, Jeff dipped his head and captured Magda’s lips in a gentle kiss.

Check it out on: