What Would Hermione Do? 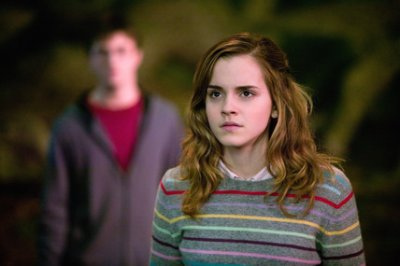 What would Hermione do is not a joke. While I would be the first to admit that there is humor behind invoking the powerful and persistent skills of a fictional character in a fantasy world – I take this very seriously.

I am a hard worker. But even the most stalwart of self-motivated, workaholics at some point fail to meet their own standard, deadline, or to-do list. While I always completed a project, there were some that might not have met my personal expectations of what I was capable of producing. Upon these days, my thoughts turned to the Brightest Witch of Her Age. I would think about Hermione, and her intellect and drive for learning. I would think about Luna and her acceptance of the weird and wonderful. I would think of Ginny, the one who stayed behind to fight. I would think of Molly Weasley, and even Narcissa Malfoy, women willing to do whatever it took to protect their families, no matter the sacrifice.

J.K. Rowling allowed a young girl to believe that smart was okay. Both her written women and she herself, have influenced my life in fundamental ways. She is truly a force to be reckoned with, and her readers have been built into an army of strong, intelligent, valued women, each for their own equally important skill.

Of course, there are others whose influence has been part of my life for as long as I can remember – Violet and Sunny Baudelaire, teaching a young girl that strength and intelligence comes in many forms and at any age. Mia Thermopolis – it’s okay to not want what’s expected every young woman would want.

There are more of these women in romance than anywhere else. I have said it before, and I will repeat it with my dying breath. Romance novels are the only media that is by, for and about women. In a world dominated by how we should look, act, dress and speak, romance novels are the safest place to be for any woman who has ever wanted to feel as though they were perfectly acceptable exactly the way they were.

I have two specific Romance Novel Heroines that immediately spring to mind when I need a confidence boost or a little extra mojo to get through my day. When it came to school, I channeled my inner Hermione. When it comes to asserting my own powers and going after what I want in the world, I take my cues from Jemma, Duchess of Beaumont and Lady Georgiana, better known as Chase, and the powerful owner of the most notorious gaming hell in London.

For different reasons, these women come to mind as my heroines, as my spirit sisters, with desires, drives, and skills to emulate. I have always been drawn to the outspoken, brash, bawdy romance heroines, especially when it comes to historical novels. If my life were a romance novel, I would not be the wallflower who everyone thinks is standoffish but is really just terribly shy. I would not be the quiet, but brilliant girl, who dazzles a Duke, while society scorns her. I would be the one who would likely cause a scandal by simply opening my mouth.

Bred in the heart of New Jersey, I never pause to speak my mind, and often with a string colorful language. Through the years, I had my lovers and my public make out sessions, and I mean it when I say that I didn’t give a damn what others thought about it. So I am drawn to the characters who are who they are, and who they are is brash, bawdy, and utterly fantastic.

Take Jemma, Duchess of Beaumont in This Duchess of Mine, book five in Eloisa James’ Desperate Duchess series. Nearly ten years in a disastrous marriage, Jemma has taken the good name of scandal upon herself. Having spent nearly the first eight years of her marriage in Paris, her reputation precedes her – a situation with which I am familiar, and she enjoys stoking the gossip rumor fires by inviting her husband’s childhood friend to play her in chess while a parallel game occurs with her husband. The prize, it is surmised by society, after the rules of the third game – blindfolded and in bed – become clear, is Jemma herself.

Of course, times have changed, and had Jemma been born in the early ‘90s, as yours truly, she would not have to suffer a husband, or a besmirched beyond recognition reputation, in order to enjoy her lovers and her equally important love affair with chess. But she is a historical character, and she exists in her own world. Even still, she flirts, she fancies, and she funs – though her back remains strong and her jaw set. She is the hostess of a perpetual party, aware of all that goes on, and she remains a powerful force throughout the tides of her marriage. Though I truly adore The Desperate Duchess Series, Jemma will forever reign as the queen of my heart.

Lady Georgiana of Never Judge a Lady by Her Cover, begets power for so many other reasons. Instead of using her sexuality as a weapon, as Jemma does with delightful regularity, Georgiana goes as far as to hide hers entirely, by becoming the unknown founder of London’s most notorious gaming hell. Known only as Chase, and seen only by the three other owners of the club, all of whom she handpicked for their special skills, Georgiana has the dirtiest secrets on every member of society at her very fingertips. She is undoubtable one of the most powerful women in all of England. On its own, that is a pretty high bar to aspire towards, but there’s more.

Ruined at the age of sixteen, Georgiana is not only a powerhouse in the office, but she’s also a mother. Take her desire for success. Now imagine that she’s been slighted by the boy to whom she gave her virginity and, later realized, by whom she was impregnated. Society scorns her, her family scorns her. Georgiana says well screw this and goes on to become a fierce powerhouse in her own right, and with a goddamned baby on her hip. It’s pure woman power magic, and not so far a stretch from many, many working women I know and respect today.

We all have our romance novel heroines. Perhaps yours is the quieter type, or the brasher type, or the one who knows all about politics or science or horses. The fact is, romance gives a choice to pick our heroine. We are not limited to the scope of women in literature, comic books, or movies, included largely for diversity and leather unitards. Instead, romance offers us every Amazonian powerhouse chick from which to chose our spirit animals. Our choice of heroine is our freedom.

When J.K. Rowling included a dozen strong, independent, brilliant, funny women, she told girls and boys the world over that your heroine can come in any shape and form. She could be smart or strong or caring. She could show signs of traditional femininity and maternity. She could not. Female heroes come in all shapes and sizes, and the romance novel industry is not praised nearly enough for allowing us the opportunity to pick what our heroes look like, act like and speak like. Nowhere are women and girls so extensively represented for being who they are, and being loved – not despite, but because of those qualities.

Hermione will remain my go-to girl when I come across a sticky research problem, or when I set my head to maybe today will be the day my ten years of Italian study will culminate in my fluency. She is my guiding light in the face of academic insanity. But in my back pocket are all of the women who cause scandal by pushing a duke into a pond, or running away from an unhappy marriage, or studying science, politics and chess. My coming soon* series, The Royal Rakes Collection, draws from all those great romance heroines who have come before. I’ve a champion sword fencer, a shameless flirt, and a female solicitor, and I plan to keep passing along the theme for many years to come. Romance novel heroines can be anything. If you read enough of these stories, it becomes so much easier to believe that you can be anything too – especially with a sisterhood like this by your side.

*Royal Rakes Collection Book 1, A Duel of Hearts, will be available for re-release in August!