What’s the Deal With Audiobooks? 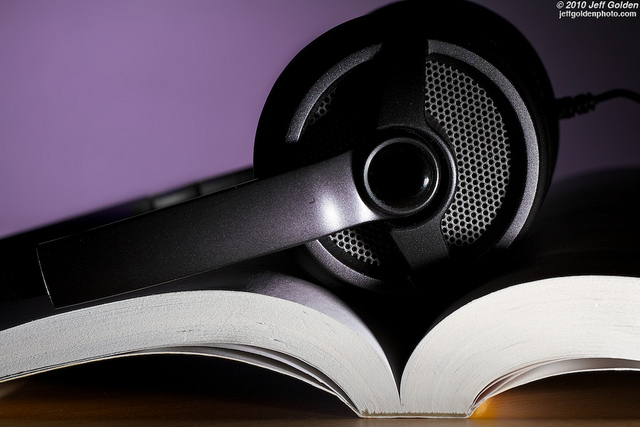 ‘I don’t know how you can listen to that stuff,’ my roommate said, as she stepped into the kitchen. That stuff was a paranormal romance novel audiobook that I had sitting on the counter as I stir fried my dinner. Nothing like a little sizzle to go with my sizzle. I don’t normally go for the paranormal genre, but I’d downloaded this one without realizing and gotten hooked.

I don’t remember how I explained my love of the audiobook to her. I think part of the problem was that, despite being one of my best friends, she had never understood my love affair with romance and why I might like to read, let alone write, the genre. Compound that with the sound of a stranger whispering innuendoed comments to the background of my dinner prep, and I can definitely see why she didn’t get it.

But nearly three years have passed and my love for the romance audiobook has grown out of control. I am on my eighteenth audiobook of the year, Hard As It Gets, by Laura Kaye and I have another waiting for download from the library. Living where I do, with nightmare traffic and the town center, gym and work close enough to walk, I can easily put on 80,000 steps a week – thanks, FitBit! But only because of audiobooks.

There are so many reasons to love the audiobook format. It’s unlike reading and unlike visual formats like movies and television. Frankly, there’s nothing I can compare it to – it’s its own animal. For that reason, I do understand why some people are a little tweaked by the idea of listening to a book. But here are some of the reasons I swear by audiobooks.

I live in the Northeast and it gets cold in the winter. Still, if I know that I’m not going to be able to hear the next chapter unless I walk to work or the gym, I bite the bullet. It’s great for me, because I want to walk places, which inspires really good exercising and moving habits. As a writer, I spend a good majority of my time behind a desk, especially in the cold weather. But if I want to take a break, my first instinct is to go for a walk or walk to an errand, rather than drive. Hell, I just got back from an hour long walk with Becca and Nick, the characters from Hard As It Gets. No type of exercise is more fun than that.

This element is very dependent upon your narrator but, while I favor some readers over others, I have yet to find a narrator I can’t stand. Everyone has their own style and you can come to pick out favorites. I absolutely love Susan Duerden, who does a lot of Eloisa James narration. She’s a pro at male voices and various character quirks, which makes the listening experience all the more inclusive. It’s like someone takes the characters from your head and does the hard part for you! That being said…

It’s a different kind of imagination than reading – since you do get these various voices and characters. But, because the character tones and conversation are already fleshed out, it gives the listener more room to create environments and visuals in their mind’s eye. Plus, the audio element adds to the ability to render the characters more fully in our minds. Where TV and film do a lot of that work for you, and writing falls on the other end of the spectrum, audiobooks are an interesting balance between the writer, the reader and the listener. I find the various inputs are usually wonderful additions to the story experience, especially when a narrator has worked with a writer before and knows what to expect from the book.

The Sexy Bits Are Extra Sexy

You knew it was coming. (Cough). In “Aural Sex”, an article from The New York Times published in November of 2015, “Troy Juliar, the senior vice president and publisher of Recorded Books Inc., the largest independent audiobook publishing company in America and Britain”, explained it succinctly, saying,  “The voice in romance and erotica is more intimate, so it’s doubly important.” This is particularly true when a narrator commits to doing male and female voices, and twice as hot when they do. It’s one thing to read some sexy line coming out of the ex-Navy Seal’s mouth, when he has you pinned to the wall, it’s another thing to have that sexy line actually whispered in your ear. While I will certainly admit there are places where I’m just not feeling it/ in an appropriate environment, most of the time a good sex scene boosts the mood. I love reading the love scenes, but listening to them is an erotic experience in and of itself.

This is one of the main reasons I love this media. We’re all busy people – jobs, kids, laundry, whatever is on your to-do list feels just as important to you as mine does to me. Audiobooks are a way of fulfilling my lust for reading on a realistic level, so I’m not taking time away from my startup company and the books I’m actually supposed to be writing, in order to read. I’m still a pretty big reader despite that, but I get a lot more book in my life if I can do it while I do other things, like making dinner or folding laundry. (Though I’d advise using headphones if there’s even the slight chance someone might walk in.) Even doing it while walking is still getting in reading time you wouldn’t otherwise have, which is really what every bookworm wants.

Audiobooks are expensive. According to Nielsen US Romance Landscape, in statistics listed on the  Romance Writers of America website, they only make up about 1% of the purchased format of romance novels, though, according to an article in The New York Times, audiobook sales rose by 35.3% in the first quarter of 2016. Still, given that an audiobook can run $18 – $28, I’m not surprised that other media are more often preferred. A diehard romance fan would rather buy four novels, they’ll last longer. I use my library’s free resources, through an app called Overdrive, which allows users to download ebooks and audiobooks to their phone, e-reader or desktop computer. There are others, such as Hoopla, but Overdrive has never steered me wrong. You can look at the length of the novel, the narrator, etc, and you’re never without a book!

If you’ve never listened to audiobook before, I highly suggest you try it. I know it’s not for everyone – just look at my roommate – but there are so many reasons to give the medium a shot. If you are an audiobook junkie, rock on, and let me know some of the reasons you love audiobooks! Like I mentioned above, audiobooks are a great way to get more books – romance novels, especially – into your life. What bookworm wouldn’t want that? ♥