RWA16 In a Nutshell 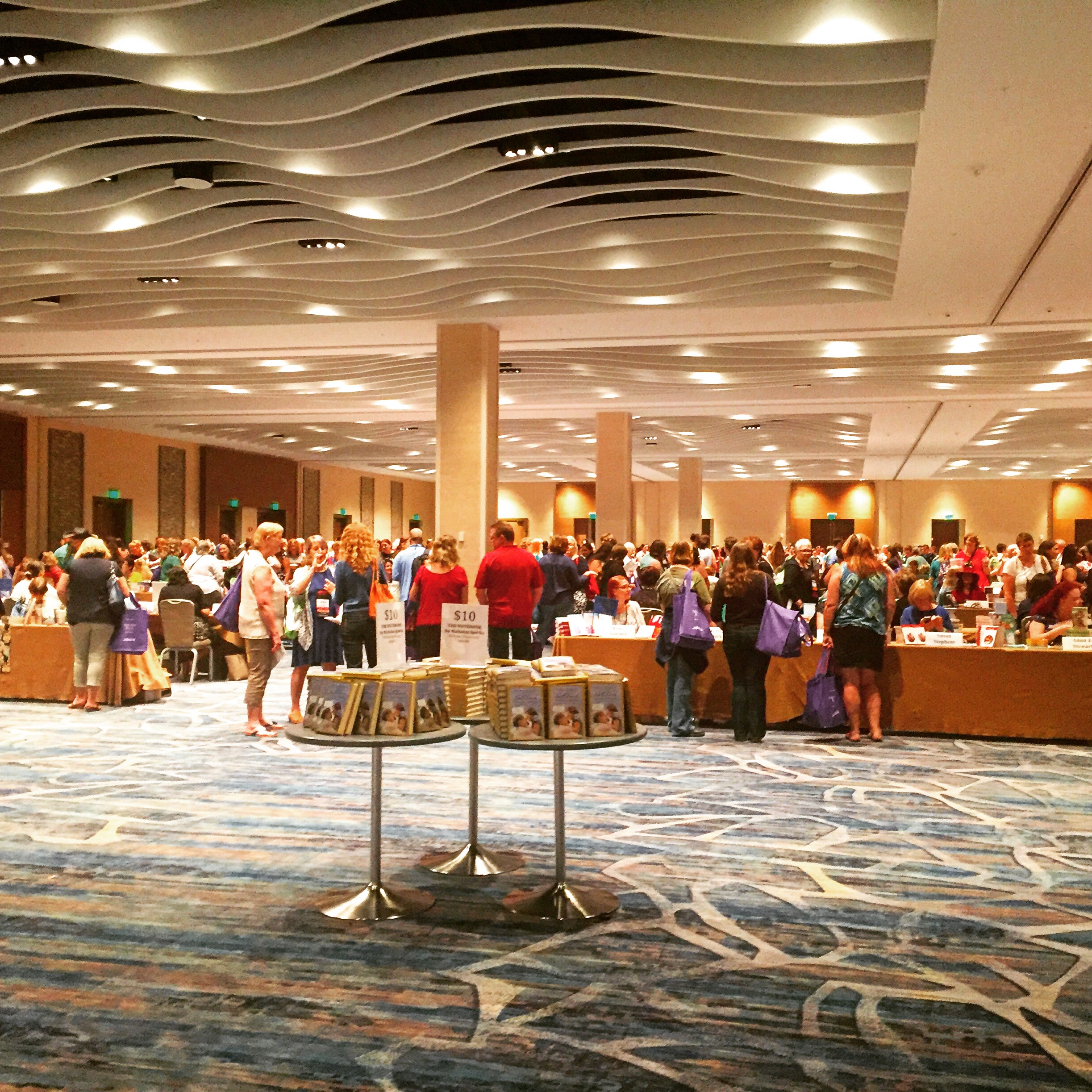 After the Romance Writers of America 2016 Conference, my boyfriend and I explored San Diego for a few days, (majorly falling in love with the city in the process.) We’ve been back home on the east coast for a little over a week, and now that the dust has settled, I can take the time to go over what I learned about preparing for, attending, and following up with this year’s RWA16.

The event was truly incredible, inspiring, and educational – in addition to being straight up fun, and there’s no way I can capture all that I learned during the conference. But here’s my best shot.

This one is so frustrating to me. I got stupidly sick literally the week before I was supposed to leave on a six hour flight to California. The day before we left, I was sitting in a clinic with tubes in my arms and the anesthetic wearing off. As it turns out, I got incredibly lucky – my symptoms were painful and constant, but my diagnosis was benign. Still, it was handicapping, and I only barely began to get my strength back the first day of the event, so I really couldn’t do much during the week of prepping. Thankfully, I’m a bit of a nut, so a lot of this stuff was done well in advance. Here are a few things to consider, when prepping for RWA.

But Your Schedule Will Change:

It’s super important to prepare, but equally as important to be flexible and willing to change your mind. Your schedule from preparation is a suggestion, a guideline of the elements you prioritize. But you never know what is going to pop up, who you will meet, and how your day might change. I had general ideas throughout each day as to where I wanted to go, but I really didn’t solidify anything, which allowed me to meet up with new friends for meals and attend publishers events that I hadn’t seen on the schedule. You also don’t know when you’re going to just crash, and it’s really important to recognize that. Sometimes it’s more important to just take a coffee break than power through. You’ll feel a lot less guilty if you’re not stuck to a hard and fast plan.

There are two major reasons to volunteer throughout your time at RWA. I helped out with the Literacy signing on Wednesday morning, which meant I wasn’t missing any events, but I would have considered it just as important as attending some of the workshops. Here’s why:

One bag of many!

I learned this one the hard way, when it came to shipping sixty some books across the country. For the book nerd, publisher events are the equivalent of being set loose in a candy shop where everything is free and nothing has calories.

It’s absolutely great to be able to walk up to authors and chat about writing and genres and books, but take care when actually selecting what books you want to bring home. I didn’t and now I have two boxes of books sitting at the foot of my bed because there’s absolutely nowhere else in my room for them to go. (That’s a whole other problem…)

The best thing I can say is, utilize the ebook system. A ton of authors have ebook giveaways, and those are way easier to carry home. Plus, they make great gifts!

Also, don’t get every single book signed to you. (I mean, this one should be obvious, but I kind of kept going into panic mode…) it makes it much more difficult to part with the books and give them away if they all have your name in them.

I don’t regret bringing all these books home. But if that’s what you want to do, then plan for it. A lot of airlines allow for two checked bags, so bring a spare duffle or backpack. The books get heavy, but dispersed among several packs, they might make it home without a trip to the post office.

Not only did I take notes, but I also typed them up as soon as I got home, allowing for easier reference and the removal of one notebook from my crowded office/bedroom. There is so much freaking information that you will consume during your days at the conference, and there is no way at all you’ll remember most of what was said without going back and looking it over. Keep a spare notebook for book recommendations. Write down quotes. There’s no way of knowing when information might come in handy, and it’s a great asset to have for the future.

That being said, I did buy the recording. At $135, it felt pricey, but there were so many events I didn’t make it to, and many I would have enjoyed going over again. (So not looking forward to hearing my own voice on the recordings in the classes where I asked a question.) The recording is nice, however, because it does take some pressure off of the moment, when you just want to focus on the class and not the future. A healthy balance of both is best, I think.

For writers, this comes naturally. I was joking with some of the ladies about how we all zone out and stare at strangers in public. One told me that her husband always places her at the outward facing seats in restaurants so she can people watch. We tend to absorb the world around us without really thinking too much about it, and that’s great.

RWA is a massive event, and even if you’re spry and dedicated, you can’t get it all in. You can’t. But sometimes the conversations in the halls and bathrooms are the most interesting and exciting. I’m not saying attack whilst peeing, but I did walk up to Tessa Dare washing her hands and chatted and she didn’t call security, so that’s a plus.

I have a massive support system at home, which I’m incredibly grateful for, but most of my friends and family aren’t very familiar with the romance genre. They listen kindly to my rants and help me work through story issues, but it’s not the same as being in a room, in a hotel, full of writers, editors and storytellers just like you. Knowing that everywhere you turn is an inspiration, a friendly sounding board or a success story, is truly incredible, and it’s awesome to just sit back and absorb that.

It’s Okay to Have Imposter Syndrome, but Don’t Wallow:

There’s so much to know about the industry and writers and genres, and no one in the world is expected to know it all. That would be completely impossible, especially given the scope of the romance industry. It can feel harrowing, to hear a word that everyone else seems to be nodding along to, and have no idea what it means. It can reinforce your sense of not belonging.

Everyone, say it with me, everyone belongs in the romance industry. This is the kindest, most forward-paying, open-hearted industry I have ever seen. Success of one book truly means success for women – women authors, women characters, women readers. We want the industry to succeed because it is truly bigger than ourselves, and if that’s done by your book reaching the bestseller list, I’m your cheerleader. Wherever you are in your career – even if you’ve only just begun thinking about your career, it’s where you are supposed to be. Imposter syndrome is a true fact of life, but we can’t let it get us down, not when there’s a whole community of incredible supporting ladies with their arms outstretched.

Allow Yourself to Be Inspired!

This is the most important rule of this conference and the industry as a whole. Of course, I believe we should find creative inspiration wherever we can, give into it, love it and cherish it. But here, I’m far more concerned with the other kind of inspiration, the inspiration we take from hearing the stories of those that have come before us, those that have made strides in representation and diverse books, those that have battled the harshest battles to create beautiful, resounding art.

In romance, inspiration is everywhere. In the vast conference of more than 2,000 people, every single person had a story. I met nurses, teachers, mothers. I met Harvard graduates, journalists, IT professionals. I met a wide and grand scope of women, (and a handful of men) who are in this industry because it is important to them, because they feel it fulfills a fundamental element of who they are. I certainly feel that way.

Leave the conference bursting with the excitement of this joyous collection of people. Leave, feeling as though romance novelists can conquer the world. Leave, knowing that authors pull books from thin air, as they work full time jobs, take care of families, and keep homes thriving. Know that is magic. Know that romance has helped to pull women up in the world, inch by inch of hard fought text.

Alright, it started out as an informative post, and turned into a picket line manifesto about the hard won liberties of working women, but that’s okay. The industry is vast and wild and wonderful, and there is so much to be gleaned from every element – the technical, the historic, the human. It truly doesn’t matter if I never use a single tip from my workshops, or talk to another writer I met there again, (neither of which are likely… ) The conference told me that I am where I belong, right here and right now. The conference said that I am doing my career right, my feminism right, and my legacy right.

RWA16 feels like just the start of an awesome journey alongside powerful, incredible authors and friends. If I came away with anything, it’s the sensation that I am going in the right direction, and that I don’t need to take the next steps alone.