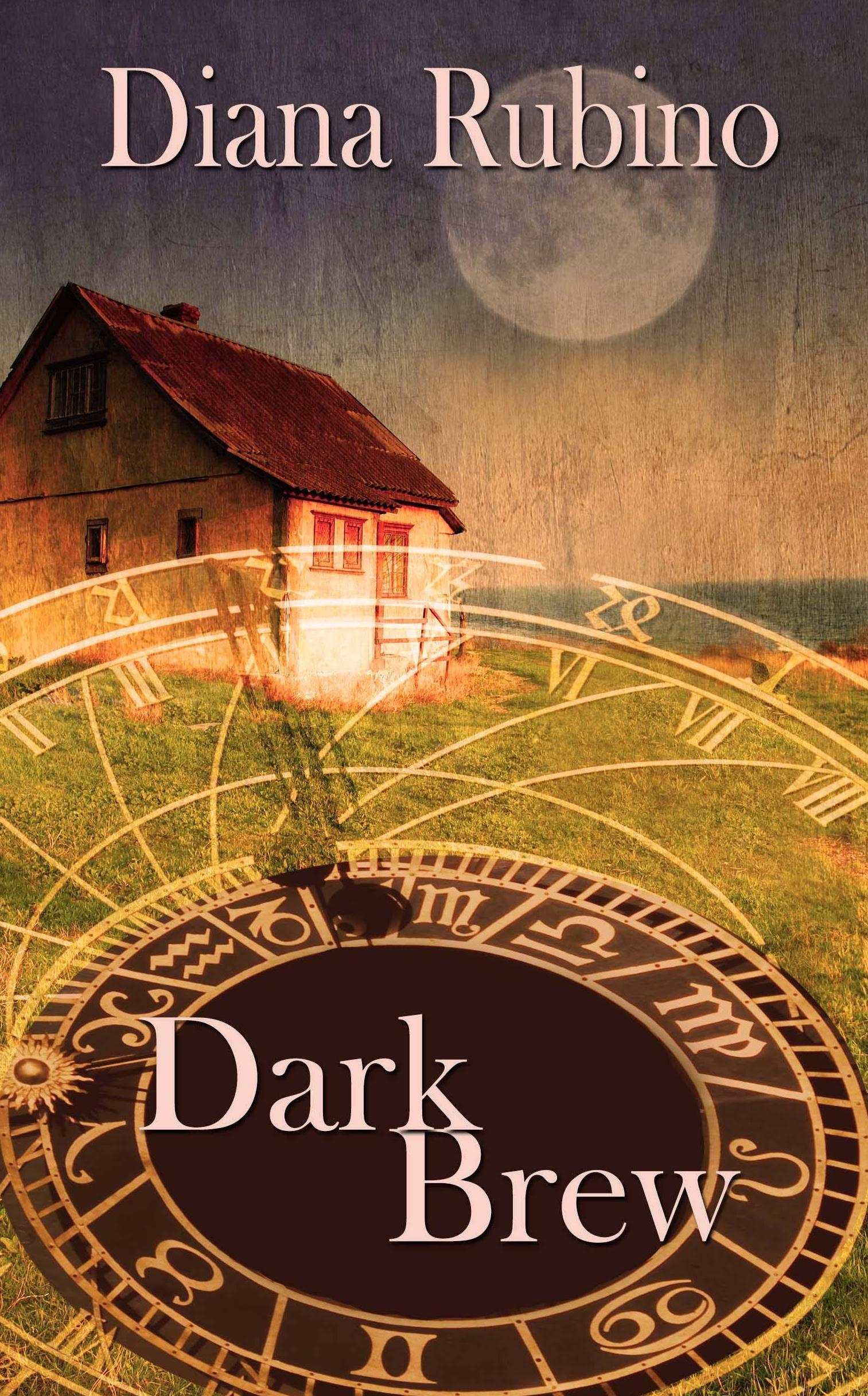 Learn from the past or forever be doomed to repeat it.

An interview with Diana about Dark Brew

Where did the story come from?

This story took 11 years from start to finish. I’m a longtime member of the Richard III Society, and in the spring of 2004, I read an article in The Ricardian Register by Pamela Butler, about Alice Kyteler, who lived in Kilkenny, Ireland in 1324, and faced witchcraft charges. After her trial and acquittal, she vanished from the annals of history. I couldn’t resist writing a book about her.

How did you decide to make it a paranormal?

I’m a believer in reincarnation, and I go on paranormal investigations whenever I can. I’ve gone on several past life regressions. Cape Cod has a lot of history and paranormal activity. I’ve been on many ghost walks and ghost hunts there. I wanted to connect Alice in the past with someone in the present, her reincarnation.

Not at all but she was the richest woman in Kilkenny, and for that reason the villagers hated her, especially the men. They accused her of killing her first husband, but she was acquitted. Then they accused her of killing her fourth husband, John LePoer, with witchcraft, the accusations more absurd than those of the 1692 witch hysteria in Salem, Massachusetts. Chancellor Edward de Burgh arrested Alice because her stepsons claimed she had murdered John by casting a witch’s spell with malefecia…and she used the enchanted skull of a beheaded thief as her cauldron.

She went to trial and her dear friend Michael Artson had her acquitted, but she vanished into the annals of history. According to legend, she went to England. But no one knows for sure.

Why did you make it a time travel?

Because my heroine, Kylah McKinley, is a Druid and has done many past life regressions, she knows she’s the reincarnation of Alice. So she has to go back and find out what happened to Alice, because too many weird things are happening to her in this life that parallel Alice’s life.

Kylah lives on my beloved Cape Cod. She’s a Druid, a ghost hunter and owns a new age store in a restored Revolutionary War-era tavern. She was also the target of a hit-and-run. Another hit-and-run crippled her husband Ted. That’s no coincidence—she’s convinced someone’s out to get them both.

She brews an ancient Druid herb mixture, goes back in time and enters Alice’s life to find out exactly what happened and who killed her husband.

These two months of hell change her life forever. Kylah’s life mirrors Alice’s in one tragic event after another—she finds her husband sprawled on the floor, cold, blue, with no pulse. Evidence points to her, and police arrest her for his murder. Kylah and Alice shared another twist of fate—they fell in love with the man who believed in them. As Kylah prepares for her trial and fights to maintain her innocence, she must learn from her past or she’s doomed to repeat it.

Have you ever spoken to Pamela Butler, who wrote the article about Alice?

Yes, we’ve corresponded. She lives in New Mexico, so we’ve never met in person. I asked Pam what inspired her to write about Alice. I’d never heard of Alice until I read her article, “Witchcraft & Heresy. She replied:

“You asked why I wrote about Alice Kyteler, who preceded Richard by a century-and-a-half. I only wrote it because others on the listserv encouraged me to write about witchcraft, a subject about which I knew very little. I ordered three books from Amazon.com on the subjects of witchcraft, heresy, Satanism, etc. for research reasons. That was my basis, plus I searched the Internet. The Malleus Malleficarum was published in 1487, just two years after Richard’s death, so it’s almost contemporary. I chanced across Alice in this reading and thought that it was an interesting case. Witch burning was fairly rare in Ireland, and wasn’t as bad in England at that time as it had been on the Continent. I wish that the M.M. had never been published; still, the fact that it was published and accepted may reveal the mindset of those times.”

An excerpt from Dark Brew

Kylah shut Ted’s den door. She couldn’t bear to look at the spot where he gasped his last breath. His presence, an imposing force, lingered. So did his scent, a blend of tobacco, pine aftershave and manly sweat. Each reminder ripped into her heart like a knife. Especially now with the funeral looming ahead, the eulogies, the mournful organ hymns, the tolling bells . . .

These ceremonies should bring closure, but they’d only prolong the agony of her grief. She wanted to remember him alive for a while longer, wishing she could delay these morbid customs until the hurt subsided.

Throughout the house, his essence echoed his personality: the wine stain on the carpet, the heap of dirty shirts, shorts and socks piled up in the laundry room, the spattered stove, his fingerprints on the microwave. But she couldn’t bring herself to clean any of it up. Painful as these remnants were, they offered a strange comfort. He still lived here.

“I’ll find that murderer, Teddy,” she promised him over and over, wandering from room to empty room, traces of him lurking in every corner. “I’ll do everything in my power to make sure justice is served. Another past life regression isn’t enough anymore. I know what I have to do now. And I promise, it will never, ever happen again—in any future life.”

She inhaled deeply and breathed him in. “Go take a shower, Teddy.” She chuckled through her tears as the doorbell rang. She cringed, breaking out in cold sweat when she saw the black sedan at the curb.

“Not again.” No sense in hiding, so she let the detectives in.

“Mrs. McKinley, we need your permission to do a search and take some of your husband’s possessions from the house,” Nolan said.

“What for?” She met his steely stare. “I looked everywhere and found nothing.”

“Mrs. McKinley, the cupboard door was open, four jars of herbs are missing, and the autopsy showed he died of herb poisoning. Those herbs,” Nolan added for emphasis, as if it had slipped her feeble mind. “Foxglove, mandrake, hemlock—and an as-yet unidentified one,” he read from a notebook. “The M.E. determined it was a lethal dose.”

Sherlock Holmes got nothin’ on him, she thought.

“Right there.” She pointed, its door gaping exactly the way she’d found it that night. Nolan went over to it and peered inside.

“Ma’am, it would be better if you left the house for a half hour or so. Please leave a number where you can be reached,” Egan ordered.

Nolan glanced down the hall. “Where is your bedroom?”

What could they want in the bedroom? “It’s at the top of the stairs on the right. But we didn’t sleep together,” she offered, as if that would faze them. It didn’t.

After giving him her cell number, she got into her car and drove to the beach.

An hour later, she let herself back in and looked around. They’d taken the computer, her case of CDs, her thumb drive, her remaining herb jars, Ted’s notebooks, and left her alone with one horrible fact: This was now a homicide case and she was the prime suspect.

Cook an authentic Italian meal, cheese ravioli with marinara sauce, garlic bread, a salad with Italian olive oil, a fine Italian red wine, and a sweet gelato for dessert. Then put on some Sinatra CDs and dance the night away!

My favorite Sinatra album is Come Dance With Me.

We always had Sinatra playing in my house when I was growing up. Nearly everyone from Hoboken or anywhere near Hoboken has a Sinatra story; being from Jersey City, I have a Sinatra story: my great grandmother and his mother Dolly were very good friends. Unfortunately I never asked Great Grandma about what she and Dolly talked about but I’ll bet a lot of juicy gossip went around!